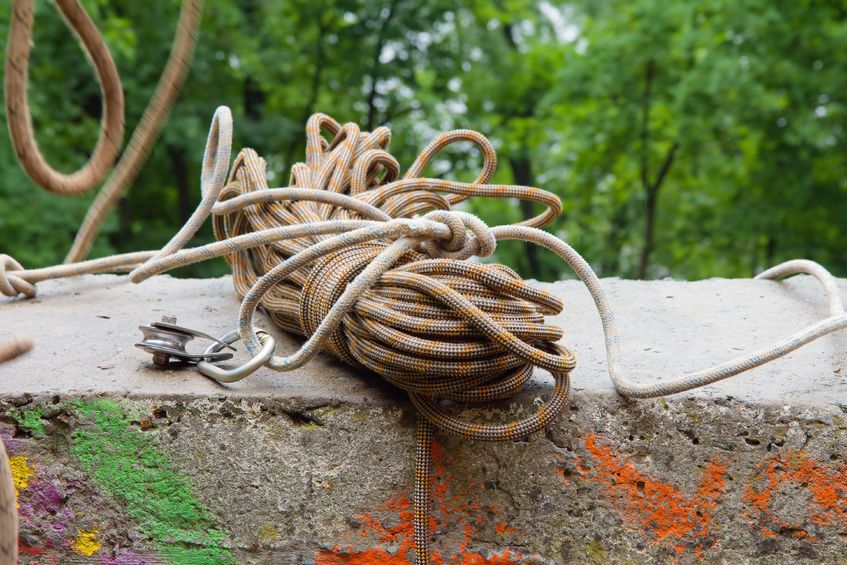 I want to share with you the story of Jim. Jim lives in Wyoming with his wife and three children. We knew him because he was part of a group of guys that were usually climbing at the rec center, when our group visits in the Winter.

During a climbing trip in Moab, Jim was helping a friend set up the second of their two pitch repel. While on the ledge, his feet became entangled in the rope, which caused him to lose his footing and fall about 40 feet, hitting the cliff sides multiple times on the way down.

Jim survived his fall, but not without serious repercussions. He suffered multiple fractures to his ribs, face and skull. He also had internal bleeding in the brain as well as a fractured femur, collapsed lungs, and fractures in the vertebral and thoracic spine. In short, he has suffered severe brain trauma and spinal cord injuries, leaving him confined to a wheel chair.

I have been following his recovery on Caringbridge and have been deeply saddened by the difficulties he and his family now face. Jim will never walk again. To make things even more challenging, every time he wakes up they have to re-explain what happened and why he can no longer walk. As they described in one journal entry, it is like a sad version of the movie, “Fifty First Dates.”

I can’t help but think about that rope, and wonder if Jim had a least an inkling it was there. Did he ignore the signs? I wonder if he noticed the rope becoming entangled around his feet. Did he rationalize his reckless action of not being anchored in when setting up a repel? Was he distracted by his surroundings or too exhausted to pay attention to the possible snare? Those answers may never come.

It’s easy to make a judgement that he should have known better. Didn’t he see the rope? It seems so senseless. But, how many times do we ignore the warning signs in our own life? How many times have me made a choice that soon resulted in our lives entangled, and falling off a cliff? Whether it is an unhealthy relationship, an addiction, or some other sin, the early warning signs often go ignored. We feel the rope at our feet and believe that if we’re careful with our actions, everything will be fine. We go down the path of destruction, continuing to ignore the rope as at it entangles us more and more. It isn’t until we fall that the gravity of our choices is displayed.

Whether it is pride, self-will, a desire for pleasure, a need for validation and acceptance, or personal gain, as we continue down a destructive path, the rope takes hold and becomes interwoven into our existence. Whatever it may be in your life, one thing is certain, sin and bad choices rob us from peace and joy. It can ruin lives, bring about calamity, hurt the ones we love, or send us plummeting over a cliff. What makes this so deceitful is the fact that in the beginning, our choices start as nothing more then standing inconsequentially on a rope, thinking nothing will happen.

The thief comes only to steal and kill and destroy. I came that they may have life and have it abundantly. – John 10:10

“The heart is more deceitful than all else and is desperately sick; Who can understand it? – Jeremiah 17:9

The good news is, this does not have to be the end of the story. There is hope. We can change our path, break free from the ropes that entangle, and walk in forgiveness and restoration. We no longer have to be slaves to our sin. Christ died for our sins, and His death exchanged our punishment for eternal life. Our once blemished life becomes white as snow.

By recognizing that we are precious, loved and accepted daughters of the King, we can move beyond our mistakes and walk in His grace and forgiveness. By keeping our eyes fixed in the Word and instead walking entangled by the Holy Spirit, the ropes that have snared us are removed. In Christ, there is hope, freedom and rest from our sins and from our past mistakes.

Then they cried out to the LORD in their trouble, And He saved them out of their distresses. He brought them out of darkness and the shadow of death, And broke their chains in pieces. – Psalm 107:13-16

But you are a chosen people, a royal priesthood, a holy nation, God’s special possession, that you may declare the praises of him who called you out of darkness into his wonderful light. – 1 Peter 2:9

This site uses Akismet to reduce spam. Learn how your comment data is processed.