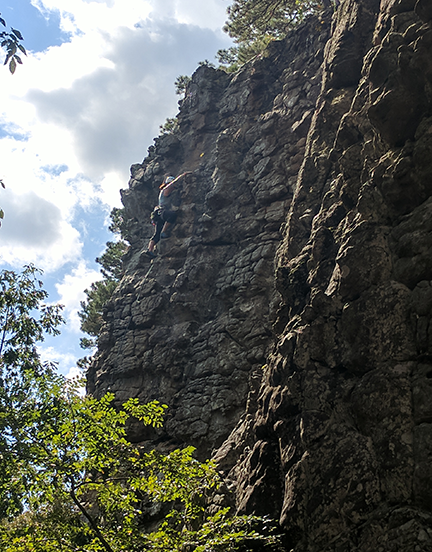 “I’m not strong enough.” I cannot tell you how many times I have gotten that response when talking to women about climbing. Most often, their initial reaction to the idea of climbing is, “I can’t do that!

Over the past couple of years, I have had this same conversation with countless numbers of women. I always tell them the same thing. I am living proof, anyone can learn to climb. I was very overweight and unhealthy when I first started climbing. I could barely get my leg up on the wall, and was too weak to pull myself up. It was through climbing that I became strong and regained my health.

How many challenges have you been presented with that your initial reaction is, “I can’t do that.” How many times has God called you to do something that left you feeling ill equipped? How many opportunities have come and gone because you believed you were not strong enough, smart enough, or prepared enough?

He gives strength to the weary and increases the power of the weak. – Isaiah 40:29

The older I get, the louder that voice gets. I can’t do that! That is beyond my ability! God promises in His word that He will strengthen and equipped us for His purposes and will. That means you do not have to get ready to move. You just have to move. Stepping out in faith allows God to work through you, and your weaknesses. It is in those moments that you grow and become who God intended you to be. Without that scary and unprepared first step, God will not have the opportunity to be glorified through you.

Back when I turned 37, I went through a very difficult and life-changing time. In a long story short, I was a single mom with very few friends, no social life, and extremely lonely. A course of unfortunate events, amidst a cloud of chronic loneliness, sent me into a year-and-a-half of backsliding. I walked away from God in exchange for drinking, nightclubs, and unhealthy relationships.

Thankfully God never abandon me during that time. He never stopped loving me and pursuing me. When I came to my senses and came back to Him, He welcome me back into His loving, grace-filled arms. As I walked away from that saga, God called me to a mission trip to Zambia with Every Orphan’s Hope. Knowing what my life had been like, I believed I was unworthy to heed such a calling. I was not ready! People like me did not go on mission trips! Yet, God called me anyway. After just coming out of a year and a half of disobedience, I acted in obedience, stepped out on faith and said yes, I will go.

But those who hope in the Lord will renew their strength. They will soar on wings like eagles; they will run and not grow weary, they will walk and not be faint. – Isaiah 40:31

That life-changing experience restored my relationship with Christ. I came home strengthened, healed, and on fire for God. At the same time, the impact of that trip left me in pieces. I remember desperately wanting to serve in a deeper way. As single mom, being a missionary was not realistic. Then, God showed me that the mission field that was in my own backyard. At the same time, due to the things I had just gone through only weeks before, I believed I had no business serving in any kind of ministry. I believed I was tainted, ill equipped, and not a good enough person.

In spite of all of that, God had something in mind. Our church was starting Koinonia groups. Other churches call them home groups, or life groups. At Bethel, we call them small groups. Much to my horror, I felt God was calling me to lead a Koinonia group for the single moms and single women in our church. Back then a lot of churches did not have anything focusing on single moms and single women. In an environment geared towards families, that demographic often felt they were forgotten, judged, and left out of the party.

I was terrified at the prospect of leading such a group. I had never even been to a Bible study. How was I supposed to run one?! I remember walking into the initial interview with Pastor Mike to discuss my idea for the group. I chuckled thinking that there was no way they would let someone like me host a lead Bible study. Pastor Mike shocked me by saying, “yes.” For the next four years I sat around a table with many amazing, courageous, lonely, and sometimes broken women from my church. We studied together, prayed for one another, and bore one another’s burdens. Truth is, in the four years I led that group, I never felt ready, strong enough, worthy or prepared. The cool thing is, being unprepared allowed God to do all the work, and move in the lives of the women that were part of our group. The group was a success, not because of me. Rather, it was a success in spite of me.

For I know the plans I have for you,” declares the Lord, “plans to prosper you and not to harm you, plans to give you hope and a future. – Jeremiah 29:11 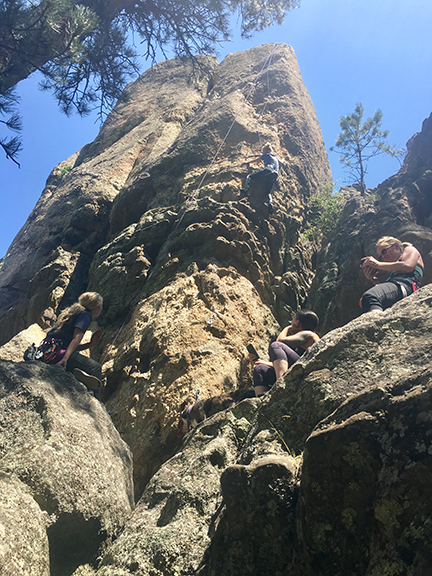 Feeling insecure and not capable played a large part in my early years of climbing as well. I was actually a member of the local climbing gym for a year before I started climbing. I was in my early forties and completely overweight. Walking into a gym filled with young, buff climbers was way too intimidating. However, I so badly wanted to learn that I kept paying the $90 a month, hoping that I would at some point get the courage to actually go climb.

One day, I was praying to God, complaining about my situation. I was having a pity party, ready to give up and cancel my membership. He reminded me that my membership had come with a free three weeks skills class that I never took. My answer, “Fine! I will take the class and then I’m quitting.”

That class consisted of just one other woman and a female instructor. Even though I could barely do anything, I fell in love with climbing anyway. Ann (the other student) and I became friends during that class. We started meeting twice a week to practice. One day I felt led to tell her how I have been praying for a climbing partner, and how she had been an answer to prayer. Her face lit up as she exclaimed, “I’ve been praying for a climbing partner too!” The rest of my life as a climber is history.

For we are God’s handiwork, created in Christ Jesus to do good works, which God prepared in advance for us to do. – Ephesians 2:10

God gives us what we need, when we need it. He has a plan for your life. It is not our job to get ready before taking the next step. It is our job to take that step and allow God to do the rest. That may be something as scary as starting a climbing Ministry, even though you are a mediocre climber at best. Or it may be something as intimidating as joining a group of women that you do not know, to learn something you thought you would never be capable of. Whatever it is, you are ready to take that first step of faith into the unknown. Take that risk, even with your limitations and shortcomings. Allow God to display his power through your weakness.

“Don’t worry that you’re not strong enough before you begin. It is in the journey that God makes you strong.” – Toby Mac #SpeakLife

This site uses Akismet to reduce spam. Learn how your comment data is processed.